Busneeds.com is the premier bus company in Davenport. With several decades in operation, we’ve become the number one bus operator in the region. Our motto as a transportation company is simple, quality service at an affordable and fair price. So if you’re looking for a cheap bus for hire, but a superior and dependable service, then book with us! 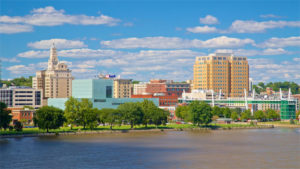 Not only do we offer a superior service. We also offer safe service. As a matter of fact; in all our years of operation, we’ve never had a single accident.The reason for this is, our drivers are carefully vetted, and given special training before being deployed on the road. So when it comes to safety, we go above and beyond the state requirements and set the standards in the industry.

Busneeds also takes the maintenance of our  vehicles seriously. As a matter of fact, in all our years of operation, we’ve never had a single breakdown or mechanical failure. Again, we go above and beyond the state and federal requirements to make sure our vehicles are maintained well, and clean.

We also have the largest fleet in the industry. So whether you need a Coachbus, Minibus, Party Bus, School Bus, Van rental or Shuttle bus service, we have the right vehicle for you. So if you’re looking for a bus for hire, then look no further! From our reservation specialists to our customer service team to our drivers, you’ll find our service superior to our competitors, guaranteed! So if you’re looking for a ride that’s comfortable, competitively priced and inexpensive, that’s worry free, and professional, then click here.

Figge Art Museum: One of the oldest art organizations in the country, and it is also the first municipal art galleries in America. Figge’s mission is to bring “art and people together” both in person and virtually, as such they have virtual exhibits as well. Figge works in collaboration with many colleges and universities as an art collection hub. The museum previously named Davenport Museum of art, was opened in 1928. However it was later reopened in August 2005 and named as Figge Art Museum. Before the coming of the museum, it was just called the Davenport Art Association. The museum was designed by the award winning David Chipperfield, and the museum received an award for the very same architecture.

Putnam Museum and Science Center: A museum of history and natural science, it was founded in 1867, and was one the first west of the Mississippi river. The theater here has one of the largest Screens Iowa, 57’ by 70’. This museum is situated at 1717 West 12th street in Davenport, Iowa. Putnam offers hands-on exhibits for people of all ages. Putnam exists to connect people to “history, cultures, nature, and environment” through exhibitions, presentations, and preserving Collections. The Science center which has more than forty five hands on experiments is a great way to get some immersive learning done. This includes everything from, Pull yourself up pulley, Laser Fog, an interactive bi-lingual robot and more.

Vander Veer Botanical Park: This thirty three acre garden is a mesmerizing haven for all sorts of plant species. It is one of the first botanical parks west of the Mississippi river.

Davenport Skybridge: The Davenport Skybridge is a pedestrian cable stayed bridge that connects Leclaire park to a courtyard and Parking ramp on second street. The bridge was completed in 2005. It is 50 feet tall, 575 feet long, and features 99 columns. At the south end facing the river, there is an observation deck. The observation deck gives you a view of Mississippi river, Leclaire Park Bandshell, The centennial bridge, and the Davenport Levee where a lot of the festivals take place. The Skybridge’s inside has Kaleidoscope lighting. The lighting has 228 LED’s, and 8036 lights. The lighting pattern can be changed for each occasion. For example, for independence day it can change to Red, White, and Blu, and for Christmas, it can be changed to Red, and Green.

German American Heritage Center & Museum: This is a museum that’s dedicated to preserving and chronicling the history and plight of German Immigrants into the United States. In the 1800’s many Germans left their homeland for the United States. States like Iowa, Nebraska, Wisconsin, Minnesota, North and South Dakota had half their populations from Germany. Davenport was considered the most German town in the midwest at that time. Therefore it became only natural to establish a German American museum in this particular town. The mission of the institution is to “preserve and enrich for present and future generations knowledge of the German immigrant experience and its impact on the American Culture”.

Go with the best tour bus rental in Davenport, Go with Busneeds.com!

Save Time and Money And Get Charter Bus Rental quotes immediately from Albuquerque New Mexico Charter Bus Companies. Compare the prices and select

Save Time and Money And Get Charter Bus Rental quotes immediately from Busneeds.com. Compare the prices and select the best price from

Save Time and Money And Get Charter Bus Rental quotes immediately from Busneeds.com. Compare the prices and choose from Licensed and Bonded